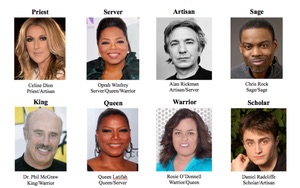 I have been working on my presentation "Archetypes and Stereotypes" for the upcoming IEA conference... as you might imagine, my 8 lust wants to say everything and share 400 slides in just a 2-hour time slot.... and in high speed like a 7...including the meaning and significance like the 4...in an up-close and personal manner like the sx.

I posted this in my personal thread by accident...and it is in Enneagram Daily but thought I would share it here. Someone tearily asked if it was a trick question....Haha….no, not a trick question.... but, could be, of course, you never know with an 874;))

These two women share the same facial archetype and are often mistaken for one another.... Someone’s visual archetype (facial features and body type) are two of 12 key points I look at when evaluating someone's potential instinctual type and Tritype® (as well as MBTI, body language and core energetic character structure, etc.). In other words, what we can see and observe.

Most of us begin with an immediate first impression of someone… As a child, I was curious if others also felt an immediate impression of people and made a quick decision about what type of person they may be. And, I wondered how consciously and quickly they formed a first impression. Oh, and yes, my family and my friends did wonder why I was always examining similarities and differences between people… now they are just used to it… 😉

At the age of 7, in 1960, I began my study of human nature with the little Dell books that could be found on any subject in the magazine section or checkout counter in most drugstores and grocery stores.

Later, in the 1970s, I learned of research that suggested a first impression is made within the first 20 seconds of seeing someone and rarely, if ever, changes. Then, later research suggested 7 seconds and then 2 seconds. Recent studies by Princeton researchers suggest that a first impression is made in 1/10 of a second... I have always found this to be true... and believe it may be even faster. It is similar to Malcolm Gladwell's theory of the “blink” test from his book Blink (the power of thinking without thinking).

I also devoured documentaries that explained the nuances of brain function for idiots… ;)) I was intrigued as to what governed and determined which immediate action needed to take place first to ensure survival… I was surprised to learn that the brain makes and acts on assumptions. These assumptions are biological imperatives, as the brain must make snap decisions to increase our odds of survival when faced with imminent danger. So, in essence, the short story is that our brain guesses… and/or lies to improve our chances of survival (longer story). Simply put, our brain reacts to stimuli, and at first glance, it can’t distinguish between a snake and something that looks like a snake… so it pumps adrenaline and basically says “danger!” until additional data says the coast is clear… 😉 Not a snake but rather a rope in an 'S' shape.

So, it would stand to reason that we as a species would need to make snap judgments as to whether or not someone is familiar to us or a stranger….and, if a stranger, are they a threat to us? Our brain would rapidly sort through images and emotional experiences to determine if someone might be a threat....a fellow tribe member that would feed us or an enemy tribe that would harm us or eat us... ;)).

So, if these two women are so similar in appearance, the question that would naturally arise is, “Are they the same Enneagram type?” If we consider stereotypes, our answer (most likely unconsciously) would be yes…. But are they truly the same type? If we look further, perhaps we will confirm they are, or we may discover they are not.

I would propose in round numbers that roughly 80% of the time, those with so many visual similarities would share the same type, and 20% of the time, they would not. And as many of you already know, I do love to explore the 20% that are more atypical… I then, along with other points of consideration, listen for language use and observe micro expressions and body language to have a more complete picture of someone’s potential Tritype® and instinctual type.

Our snap judgments and resulting assumptions create our first impression (and, by extension, our view of typing). This was the focus of my IEA presentation in 2013. I will explore, compare and contrast both archetypes and stereotypes and how they influence our opinion of someone’s potential type. So, as fellow enthusiasts, I would love to know your thoughts.